The project involved the development of a flow-through lake water sampler that can sample in real time, macro-invertebrates such as Mysis relicta and Bythotrephes longimanus. Patrick explained to the judges that “these zooplankton species are alien to Canadian lakes and are poised to potentially disrupt aquatic life in northern Ontario lakes”. The sampler and accompanying software can be used to produce three-dimensional charts, either in real time or back in the lab. Rick Corbett, the Chief Judge for the Canadian SJWP competition noted that “the technique that Patrick and Robin have developed will allow scientists to scan the lake water column very quickly and then decide on what depths and areas to concentrate conventional zooplankton sampling methods.” 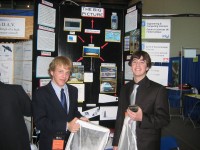