Project Abstract: Phenol is a harmful substance that is a by-product of many chemical processes. It is one of the most common pollutants in aquatic and land habitats. The Pseudomonas putida bacteria has been genetically modified to eat this toxin, converting it to carbon dioxide and water (which are not harmful to the environment). The bacteria itself is not harmful to plant or animal life. We wanted to determine the temperature that would best allow the bacteria to degrade the phenol. Three temperatures, 26°C, 30°C and 34 °C were tested and we found that at 26°C the population of bacteria grew the fastest. We also investigated the use of a second layer that could absorb most of the phenol, since the bacteria can only handle lower concentrations of it. We tested two different kinds of second layers, one was 2-undecnanone (a clear liquid) and the other was poly ethylene co-vinyl acetate (rubber beads). The population of bacteria grew the fastest when the rubber beads were used. We also conducted tests using no second layer, so all the phenol was in the same solution as the bacteria. In these tests, the bacteria did not grow very much (as we had expected), since the phenol concentration was so high that it killed the bacteria. It is possible that in the future this technique could be used on a large scale to safely get rid of industrial waste. The rubber beads would be the most practical second layer if this method was to be used on a large scale since they proved to be the most effective for bacterial growth and therefore phenol degradation. The beads could be used once, collected and rinsed and then they could be reused (this would be very difficult to do with the liquid as it would be hard to collect after it had been used once).  From a cost standpoint, the beads would also be a good investment since they could be bought once and reused many times. 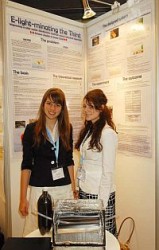